I finally found another women’s clothing retailer to compare with. The Specialty Fashion Group (SFH), covering the brands Millers, Katies, Crossroads, Rivers, Autograph and City Chic.See below the numbers I was able to locate or calculate. When looking at these figures, maybe it is possible Noni B is following the industry trend. SFH have performed a little better but not at a level that would be enticing to investors. Some more figures would be good. Awaiting Stephanie Beck’s Premier Investments analysis for comparison.

Have finished Assignment 3 to the best of my ability. I would appreciate any feedback.

In conclusion, Noni B is a firm in trouble and only seems to have survived due to the “rainy day cash” they had squirreled away in better times. Most of the ratios are negative or not healthy. Please see my assignment for the full run down.

Firstly, thanks to all of you who have interacted with me either via my blog or on the forums. I have enjoyed the exchanges. I have decided that being a Property Valuer is not something I want badly enough to continue with the study and the impact it has had on my nice life. I will finish my 2 subjects and call it quits. All the best to those of you who will soldier on.

Now the relevant stuff ,ratios and what do they tell us. It’s pretty simply, return a profit and all of those ratios will at least be the correct side of zero. An  accounting profit rather than a loss would reaffirm that the company has some value, hopefully translating to no necessity to devalue through impairments of intangibles.

I have attached my spreadsheet for those who are interested in seeing how a retailer of women’s clothing in Australia should strive not to perform.

With the current economic doom and gloom in our fair land I hope that the new owner’s of Noni B, Alceon Bidco, can come up trumps and turn the company around, ensuring employment for all those involved.

I will post my assignment for feedback in the blog forum in Moodle and here later in the week.

Well, my trip to NZ seems like a distant memory and I have only been back just over a week. I have a huge admiration for those of you who hold down full time jobs, have young families and study. You are AMAZING!!

As usual, it took 4 hours to watch Maria’s 2 hour video to check I was correctly linking my figures in the Ratio section of the spreadsheet. I have some scarily large negative numbers. Someone in Maria’s lecture asked about this and I understand why Economic Profit can be negative but  I also think that EPS, and Profit Margins can legitimately be negative because if you post a loss instead of a gain it has to be negative.

I have only just done the calculations but my early impressions is that Noni B’s negative accounting profit and huge decline in Net Operating Assets over the 4 years analysed are the major culprits for these horrible numbers – RNOA in 2015 is -3470%!!!! The NOA have declined from $17.5M to $140, 000.

Once I have had some time to delve into what the numbers might mean, I will be back with something, that hopefully, might make some sense.

Off on a long-awaited trip to the north island of NZ, booked before I knew I was accepted to be a Uni student. Certainly  has added a bit of stress and pressure to my life. First time studying at tertiary level in over 30 years and then have 2 weeks out!

Imagine my surprise when looking at entertainment in Auckland – Ryman Healthcare season of Wizard of Oz presented by the Royal New Zealand Ballet. Never heard of them before and now they are popping up in the most unexpected places.

I know it is probably wishful thinking but if anyone has time to give some feedback it would be much appreciated. I will provide feedback to late comers the weekend before due date.

Hope we have a day like this for Cathedral Cove! 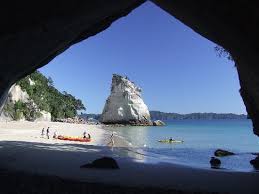 Watched Maria’s video yesterday and wrestled with restating the income statement. Was fairly straightforward but did wish I had followed her original advice and listed some of entries from the Notes in the financial reports into the original spreadsheets. They have now been updated and surprise, the balances were the same!!

The tax treatment is really not that difficult to understand as it can be related to circumstances in our own lives. When we do our tax return we have the tax we have paid, less any work related expenses (operating expenses) and adding in any interest earned from our banking (financial revenue). So if we happened to have earned lots of interest (not likely at the current rates) it may offset our work related expenses and we might still need to pay more tax.

Even with restating everything there are still things in Noni B’s financial statements that I don’t understand. For instance, how the share-based payments to employees work?

I understand that deferred tax assets are exactly that because they offset your future tax liabilities but are they  making Noni B’s balance sheet look a little more healthy than it deserves too??

Cash at back, cash on hand, cash in transit (this brings a visual of a van running around stashed with cash, but I think it is credit card transactions not yet realised) and short term deposits.

So in my wisdom(?) I have lumped the first 3 and done the 1% maths explained on Maria’s lecture video (thank goodness I found those!). I have then  distributed them between operating (1%) and financing (the balance)  and the short term deposits as financing assets.

Do you think I have taken the right approach?

I didn’t have a Uni calendar in my head when booking a trip to NZ so I am madly trying to get assignment 2 done before I go which is making me look like a real nerd! Hoping some others will be able to comment soon on the difficulties they have encountered.

I have finished my draft. Yippee! Please feel free to have a look and provide feedback.

Thanks for your help Britt!

Noni B has been in the news the past 2 years and probably not for reasons they would have liked.

Firstly, BRW did a story about the impending sale of Noni B by the Kindl family in September, 2014.

Then there was the continued operating at a loss reported in December, 2014 by Inside Retail Australia.

Then a little bit of positive news with the purchase of Queenspark and Event brands to increase their online exposure.

The positive trend continues with the revelation by the Sydney Morning Herald that the first half-year results for 2016 show a profit.

I wasn’t sure what a “vertical resource strategy model” is but I wonder if it is helping. This is an explanation I found.

This is a strategy used by a company so that they have control over their suppliers and distributors in a bid to reduce transaction costs and have a secure supply chain providing inventory that meets their needs more closely.

I have a headache and have not used a computer this much ever. Between updating this and attempting to get Assignment 1 out of the way so I can have some quality time with the family over Easter I think I overtook 10-12  hours for the week  about 5 ago!!

I think when Martin has decided that he no longer wishes to lecture that perhaps he could be a comedian. I do wonder if he picked this company for me deliberately! Though I must confess I look in the window and think it is for woman more mature than myself. However, I have read somewhere that the demographic they are aimed at is the 40 -45 years plus group.

Noni B’s principal activity is the retailing of women’s apparel and accessories. They sell through a national network of boutique stores in shopping centers and main streets as well as online. The company was founded in 1977 by the Kindl family. They purchased 2 stores from Noni Broadbent who was renowned for her superior customer service. The company grew to be a nationwide enterprise of over 200 stores and was listed on the Australian Stock Exchange in 2000. In October 2014 the company was sold to Alceon Bidco for just over $16M. A new CEO and Managing Director was appointed at this time in a bid to reverse the after-tax loss of $7.8M reported at year end 29 June, 2014.

The initiatives to be pursued to turn the financial direction around were supply chain improvements, exit from unprofitable stores and improved quantity, quality and mix of inventory. The company also bought 2 new brands Queenspark and Event. I have still to figure out why but think it may have been to access an online presence in the marketplace.

The 2015 Annual Report does indicate early signs of improvement with a smaller after-tax loss being declared and the interim report for half-year ended 27 December, 2015 showing a profit.

Apparently, Noni B has a very loyal customer base and they are remaining the focus of the business. An understanding of what the customers want is very important as is improving their in-store experience.

I have written a large number of questions while looking through the Annual Report. I think it has prompted more questions than it answered. My biggest question is how can a company continue to operate at a loss for 3 years. I am sure all of its employees are very thankful that it has and I hope it continues to do so.

If you would like to know a little more about Noni B, here is a link to their website. Here also is a link to an article regarding their improved performance for the second half of 2015.